Description by Michael of Thessaloniki

Description of the most holy great church of god, spoken at the time of the dedication feast of the same most holy church by the very learned deacon and teacher of the gospels, Michael of Thessalonica, who was also master of the orators.

1. Verily this temple of which the encaenia are being celebrated, as it is new in Christ, and, by virtue of the word of worship has not grown old, but remains in the same state and shall continue to do so in future, even though the gates of death (that is, the mouths of the heretics) gape against it, so is it new in its marvels, being so exceedingly great as it towers upwards like the mountains and leaves below all those things which art sets its hands to create, and so exceedingly beautiful as it shines forth, for all its age, as though it had been raised above time itself, and had not been immersed in its current. How its countenance flashes forth like liquid through the gold which is everywhere! The enduring newness in Christ of this building (even though its consecration is celebrated now) can be observed with spiritual vision; but the eternal novelty of wonder, which remains unaltered even for those who frequently visit the church and which it provides for the beholders by its grandeur and form and the costliness of the material - this can be seen with the eyes, so that all points can be scrutinized both in themselves and in their connection with each other, and admiration brought together from all sides. Nor is it less seemly to describe the church in words, as far as this is possible; not the whole of it, however, since one who had set forth this as the occasion of his discourse would have difficulty in going through the entire subject, it being so great and various.

All events in the topic Writings: 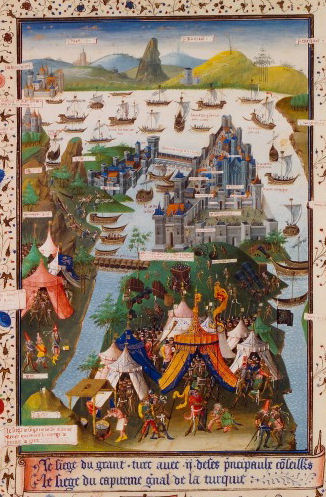