Rowe was the first biographer to record the tradition, repeated by Johnson, that Shakespeare retired to Stratford "some years before his death". He was still working as an actor in London in 1608; in an answer to the sharers' petition in 1635, Cuthbert Burbage stated that after purchasing the lease of the Blackfriars Theatre in 1608 from Henry Evans, the King's Men "placed men players" there, "which were Heminges, Condell, Shakespeare, etc.". However, it is perhaps relevant that the bubonic plague raged in London throughout 1609. The London public playhouses were repeatedly closed during extended outbreaks of the plague (a total of over 60 months closure between May 1603 and February 1610), which meant there was often no acting work. Retirement from all work was uncommon at that time. Shakespeare continued to visit London during the years 1611–1614. In 1612, he was called as a witness in Bellott v. Mountjoy, a court case concerning the marriage settlement of Mountjoy's daughter, Mary. In March 1613, he bought a gatehouse in the former Blackfriars priory; and from November 1614, he was in London for several weeks with his son-in-law, John Hall. After 1610, Shakespeare wrote fewer plays, and none are attributed to him after 1613. His last three plays were collaborations, probably with John Fletcher, who succeeded him as the house playwright of the King's Men.

Shakespeare died on 23 April 1616, at the age of 52. He died within a month of signing his will, a document which he begins by describing himself as being in "perfect health". No extant contemporary source explains how or why he died. Half a century later, John Ward, the vicar of Stratford, wrote in his notebook: "Shakespeare, Drayton, and Ben Jonson had a merry meeting and, it seems, drank too hard, for Shakespeare died of a fever there contracted", not an impossible scenario since Shakespeare knew Jonson and Drayton. Of the tributes from fellow authors, one refers to his relatively sudden death: "We wondered, Shakespeare, that thou went'st so soon / From the world's stage to the grave's tiring room."

He was survived by his wife and two daughters. Susanna had married a physician, John Hall, in 1607, and Judith had married Thomas Quiney, a vintner, two months before Shakespeare's death. Shakespeare signed his last will and testament on 25 March 1616; the following day, his new son-in-law, Thomas Quiney was found guilty of fathering an illegitimate son by Margaret Wheeler, who had died during childbirth. Thomas was ordered by the church court to do public penance, which would have caused much shame and embarrassment for the Shakespeare family.

Shakespeare bequeathed the bulk of his large estate to his elder daughter Susanna under stipulations that she pass it down intact to "the first son of her body". The Quineys had three children, all of whom died without marrying. The Halls had one child, Elizabeth, who married twice but died without children in 1670, ending Shakespeare's direct line. Shakespeare's will scarcely mentions his wife, Anne, who was probably entitled to one-third of his estate automatically. He did make a point, however, of leaving her "my second best bed", a bequest that has led to much speculation. Some scholars see the bequest as an insult to Anne, whereas others believe that the second-best bed would have been the matrimonial bed and therefore rich in significance.

Shakespeare was buried in the chancel of the Holy Trinity Church two days after his death. The epitaph carved into the stone slab covering his grave includes a curse against moving his bones, which was carefully avoided during restoration of the church in 2008:

(Modern spelling: Good friend, for Jesus' sake forbear, / To dig the dust enclosed here. / Blessed be the man that spares these stones, / And cursed be he that moves my bones.)

Some time before 1623, a funerary monument was erected in his memory on the north wall, with a half-effigy of him in the act of writing. Its plaque compares him to Nestor, Socrates, and Virgil. In 1623, in conjunction with the publication of the First Folio, the Droeshout engraving was published.

Shakespeare has been commemorated in many statues and memorials around the world, including funeral monuments in Southwark Cathedral and Poets' Corner in Westminster Abbey. 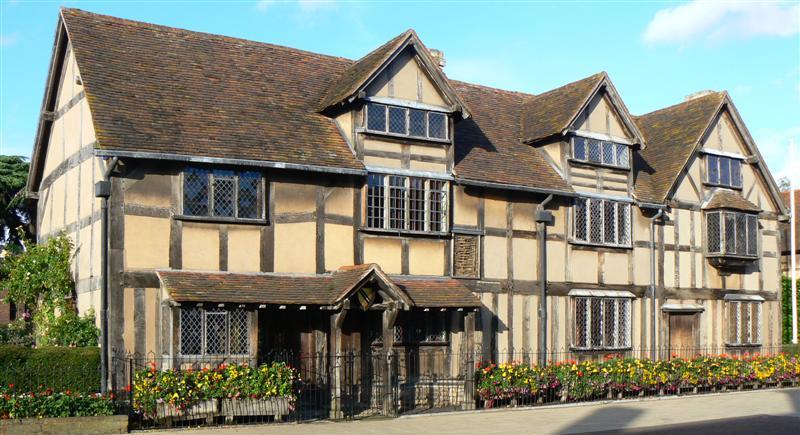 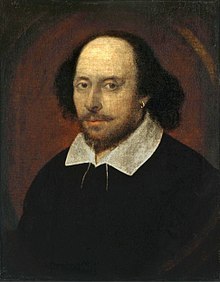