Description of Hagia Sophia by Prokopios

The Emperor, disregarding all considerations of expense, hastened to begin construction and raised craftsmen from the whole world. It was Anthemius of Tralles, the most learned man in the discipline called engineering (mêchanikê), not only of all his contemporaries, but also as compared to those who had lived long before him, that ministered to the Emperor's zeal by regulating the work of the builders and preparing in advance designs of what was going to be built. He had as partner another engineer (mêchanopoios) called Isidore, a native of Miletus, who was intelligent in all respects and worthy to serve the Emperor Justinian....

So the church has been made a spectacle of great beauty, stupendous to those who see it and altogether incredible to those who hear of it....Its breadth and length have been so fittingly proportioned that it may without impropriety be described as being both very long and extremely broad. And it boasts of an ineffable beauty, for it subtly combines its mass with the harmony of its proportions, having neither any excess nor any deficiency, inasmuch as it is more pompous than ordinary [buildings] and considerably more decorous than those which are huge beyond measure; and it abounds exceedingly in gleaming sunlight. You might say that the [interior] space is not illuminated by the sun from the outside, but that the radiance is generated within, so great an abundance of light bathes this shrine all round.

The face of the church-this would be the part turned towards the rising sun, intended for the celebration of God's mysteries-has been wrought in the following fashion. A construction of masonry rises from the ground, not in a straight line, but gradually drawing back from its sides and receding in the middle, so as to describe a semi-circular shape which is called a half-cylinder by specialists, and this towers to a precipitous height. The extremity (huperbolê) of this structure terminates in the fourth part of a sphere,92 and above it another crescent-shaped form (mênoides) 93 is lifted up by the adjoining parts of the building, wonderful in its beauty yet altogether terrifying by the apparent precariousness of its composition. For it seems somehow not to be raised in a firm manner, but to soar aloft to the peril of those who are there; and yet, it is supported with quite extraordinary firmness and security. On either side of these [elements] columns are placed on the ground, and these, too, do not stand in a straight line, but retreat inward in a half-circle as if making way for one another in a dance,94 and above them is suspended a crescent-shaped form. Opposite the eastern wall is another one that contains the entrances, and on either side of the latter both the columns and the superstructure stand in a half-circle, in a manner very similar to what has been described. In the middle of the church there rise four man-made eminences which are called piers (pessoi), two on the north and two on the south, opposite and equal to one another, each pair having between them exactly four columns. The eminences are built to a great height and are composed of big stones, carefully selected and skillfully fitted together by the masons. As you see them, you could suppose them to be precipitous mountain peaks. Upon these are placed four arches so as to form a square, their ends coming together in pairs and made fast at the summit of those piers, while the rest of them rises to an immense height. Two of the arches, namely those facing the rising and the setting sun, are suspended over empty air, while the others have beneath them some kind of structure (oikodomia) and rather tall95columns.

Above the arches the construction rises in a circle: it is through this that the first light of day always smiles. Indeed, I believe it towers above the whole earth, and the structure has gaps at short intervals,96being intentionally interrupted so that the openings corresponding to the divisions in the masonry are channels of constant illumination. And since the arches are joined together on a square plan, the intervening construction assumes the form of four triangles.97 The bottom end of each triangle, being pressed together by the conjunction of the arches, causes the lower angle to be acute, but as it rises it becomes wider by the intervening space and terminates in the arc of a circle, which it supports, and forms the remaining [two] angles at that level. Rising above this circle is an enormous spherical dome which makes the building exceptionally beautiful. It seems not to be founded on solid masonry, but to be suspended from heaven by that golden chain98 and so cover the space.

All of these elements, marvellously fitted together in mid-air, suspended from one another and reposing only on the parts adjacent to them, produce a unified and most remarkable harmony in the work, and yet do not allow the spectators to rest their gaze upon any one of them for a length of time, but each detail readily draws and attracts the eye to itself. Thus the vision constantly shifts round, and the beholders are quite unable to select any particular element which they might admire more than all the others. No matter how much they concentrate their attention on this side and that, and examine everything with contracted eyebrows, they are unable to understand the craftsmanship and always depart from there amazed by the perplexing spectacle. So much, then, for this.

It was by means of many devices that the Emperor Justinian and the engineers Anthemius and Isidore gave stability to the church, suspended as it is in mid-air. Most of these are beyond my comprehension and I find it impossible to express them in words; one device only I shall describe here in order to demonstrate the strength of the whole work. It is as follows: The piers which I have just mentioned are not built like ordinary masonry, but in this fashion. Courses of stone have been laid in a four-square shape99; they are hard by nature, but worked smooth, and those of them that were intended to form the lateral projections of the piers have been cut at an angle, while the ones that were assigned an intermediary position have been made rectangular. These were joined together not with lime which they call unslaked, nor with asphalt, the pride of Semiramis in Babylon, nor with any other similar substance, but with lead poured into the interstices, which has penetrated into all the intervening spaces and having hardened in the joints, binds the stones together.100 This, then, was built in the above manner; but let us now proceed to the remaining parts of the church.

The entire ceiling has been overlaid with pure gold which combines beauty with ostentation, yet the refulgence from the marble prevails, vying as it does with that of the gold. There are two colonnades (stoai), one on each side, not separated from the church by any structural element, but actually adding to the measure of its width and extending to its whole length, while their height is less than that of the building. They, too, have a vaulted ceiling (orophêtholos) adorned with gold.

Description of The Hagia Sophia in Constantinople by Prokopios, written 544 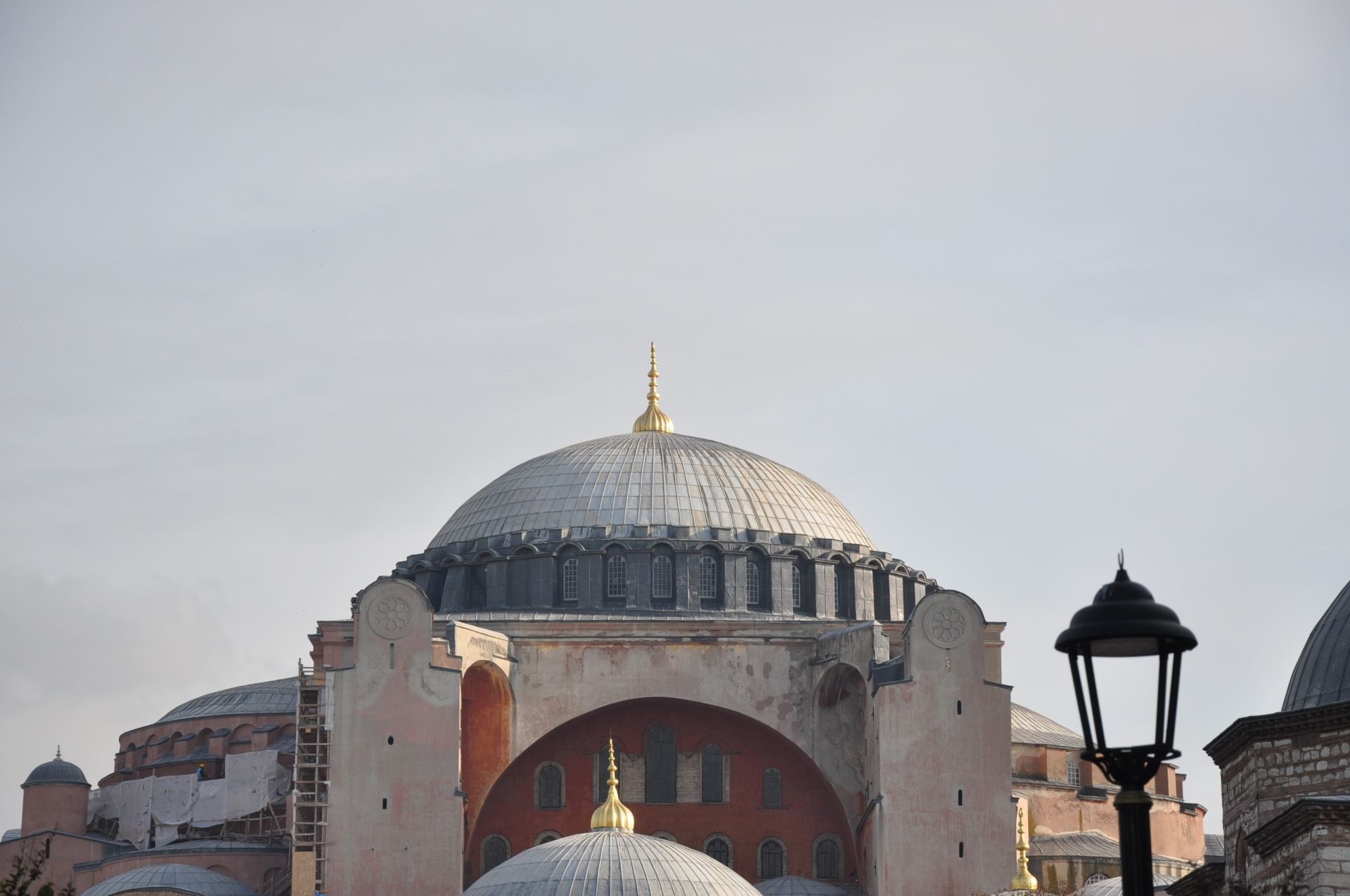