In cosmology, baryon acoustic oscillations (BAO) are fluctuations in the density of the visible baryonic matter (normal matter) of the universe, caused by acoustic density waves in the primordial plasma of the early universe. In the same way that supernovae provide a "standard candle" for astronomical observations, BAO matter clustering provides a "standard ruler" for length scale in cosmology. The length of this standard ruler is given by the maximum distance the acoustic waves could travel in the primordial plasma before the plasma cooled to the point where it became neutral atoms (the epoch of recombination), which stopped the expansion of the plasma density waves, "freezing" them into place. The length of this standard ruler (~490 million light years in today's universe) can be measured by looking at the large scale structure of matter using astronomical surveys. BAO measurements help cosmologists understand more about the nature of dark energy (which causes the acceleration of the expansion of the universe) by constraining cosmological parameters.

The early universe consisted of a hot, dense plasma of electrons and baryons (protons and neutrons). Photons (light particles) traveling in this universe were essentially trapped, unable to travel for any considerable distance before interacting with the plasma via Thomson scattering. As the universe expanded, the plasma cooled to below 3000 K — a low enough energy such that the electrons and protons in the plasma could combine to form neutral hydrogen atoms. This recombination happened when the universe was around 379,000 years old, or at a redshift of z = 1089. Photons interact to a much lesser degree with neutral matter, and therefore at recombination the universe became transparent to photons, allowing them to decouple from the matter and free-stream through the universe. Technically speaking, the mean free path of the photons became of order the size of the universe. The cosmic microwave background (CMB) radiation is light that was emitted after recombination that is only now reaching our telescopes. Therefore, looking at, for example, Wilkinson Microwave Anisotropy Probe (WMAP) data, one is basically looking back in time to see an image of the universe when it was only 379,000 years old. 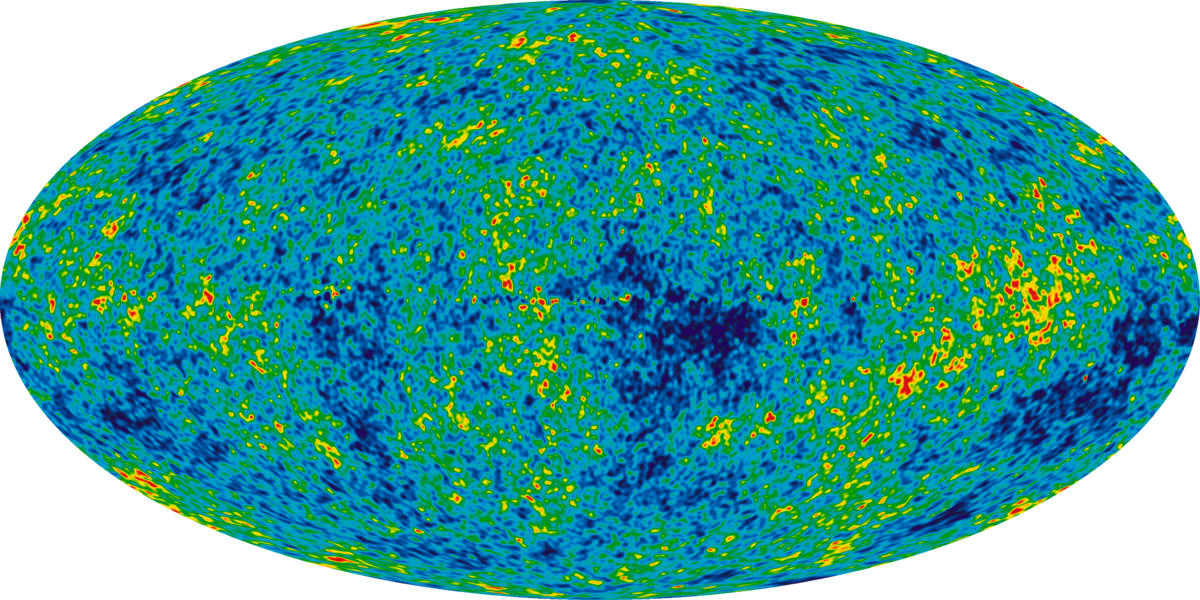 Temperature anisotropies of the CMB based on the nine year WMAP data.

WMAP indicates a smooth, homogeneous universe with density anisotropies of 10 parts per million. However, There are large structures and density fluctuations in the present universe. Galaxies, for instance, are a million times more dense than the universe's mean density. The current belief is that the universe was built in a bottom-up fashion, meaning that the small anisotropies of the early universe acted as gravitational seeds for the structure observed today. Overdense regions attract more matter, whereas underdense regions attract less, and thus these small anisotropies, seen in the CMB, became the large-scale structures in the universe today.

Imagine an overdense region of the primordial plasma. While this region of overdensity gravitationally attracts matter towards it, the heat of photon-matter interactions creates a large amount of outward pressure. These counteracting forces of gravity and pressure created oscillations, analogous to sound waves created in air by pressure differences.

Consider a single wave originating from this overdense region from the center of the plasma. This region contains dark matter, baryons and photons. The pressure results in a spherical sound wave of both baryons and photons moving with a speed slightly over half the speed of light outwards from the overdensity. The dark matter interacts only gravitationally, and so it stays at the center of the sound wave, the origin of the overdensity. Before decoupling, the photons and baryons moved outwards together. After decoupling the photons were no longer interacting with the baryonic matter and they diffused away. That relieved the pressure on the system, leaving behind a shell of baryonic matter at a fixed radius. This radius is often referred to like the sound horizon. Without the photon-baryon pressure driving the system outwards, the only remaining force on the baryons was gravitational. Therefore, the baryons and dark matter (left behind at the center of the perturbation) formed a configuration which included overdensities of matter both at the original site of the anisotropy and in the shell at the sound horizon for that anisotropy.

Many such anisotropies created the ripples in the density of space that attracted matter and eventually galaxies formed in a similar pattern. Therefore, one would expect to see a greater number of galaxies separated by the sound horizon than at other length scales. This particular configuration of matter occurred at each anisotropy in the early universe, and therefore the universe is not composed of one sound ripple, but many overlapping ripples. As an analogy, imagine dropping many pebbles into a pond and watching the resulting wave patterns in the water. It is not possible to observe this preferred separation of galaxies on the sound horizon scale by eye, but one can measure this artifact statistically by looking at the separations of large numbers of galaxies.

The physics of the propagation of the baryon waves in the early universe is fairly simple; as a result cosmologists can predict the size of the sound horizon at the time of recombination. In addition, the CMB provides a measurement of this scale to high accuracy. However, in the time between recombination and the present day, the universe has been expanding. This expansion is well supported by observations and is one of the foundations of the Big Bang Model.

In the late 1990s, observations of supernovae determined that not only is the universe expanding, it is expanding at an increasing rate. A better understanding of the acceleration of the universe, or dark energy, has become one of the most important questions in cosmology today. In order to understand the nature of the dark energy, it is important to have a variety of ways of measuring the acceleration. BAO can add to the body of knowledge about this acceleration by comparing observations of the sound horizon today (using clustering of galaxies) to that of the sound horizon at the time of recombination (using the CMB). Thus BAO provides a measuring stick with which to better understand the nature of the acceleration, completely independent from the supernova technique. 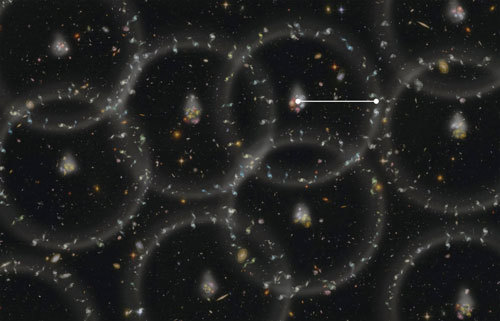 A cartoon produced by the BOSS project showing the spheres of baryons around the initial dark matter clumps.

The Sloan Digital Sky Survey (SDSS) is a 2.5-metre wide-angle optical telescope at Apache Point Observatory in New Mexico. The goal of this five-year survey was to take images and spectra of millions of celestial objects. The result of compiling the SDSS data is a three-dimensional map of objects in the nearby universe: the SDSS catalog. The SDSS catalog provides a picture of the distribution of matter in a large enough portion of the universe that one can search for a BAO signal by noting whether there is a statistically significant overabundance of galaxies separated by the predicted sound horizon distance. 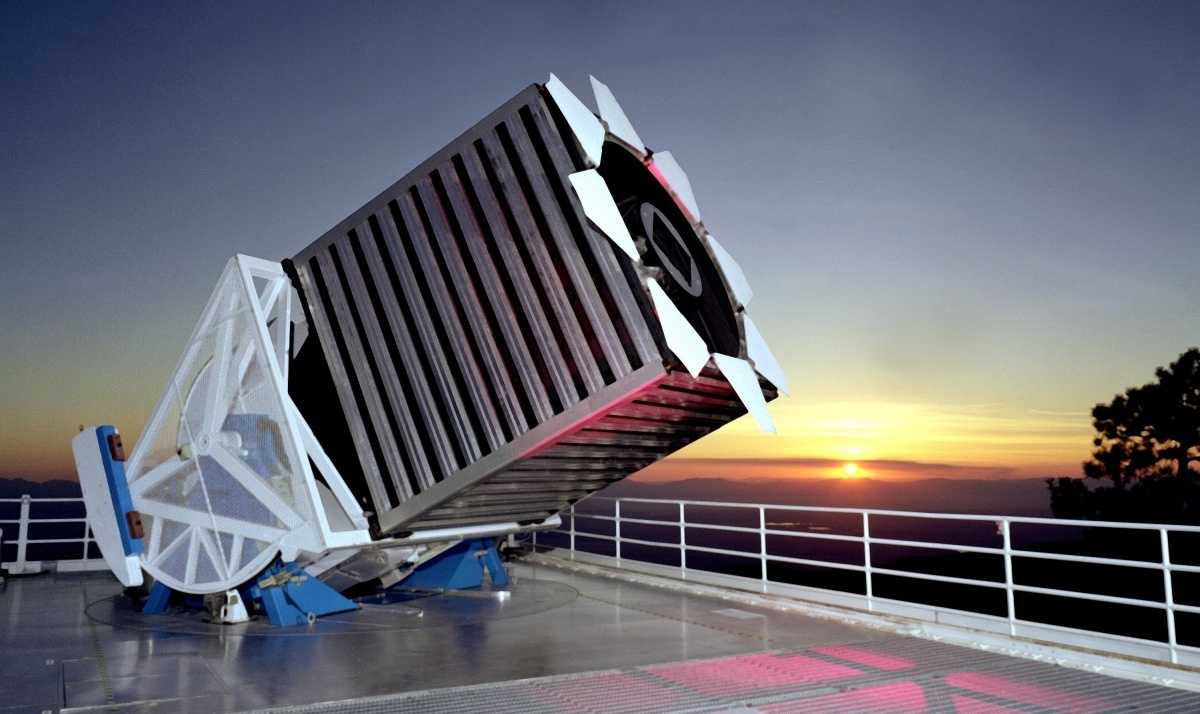 Baryonic Acoustic Oscillations (BAO) involves measuring the spatial distribution of galaxies to determine the rate of growth of cosmic structure within the overall expansion of the universe. This comparison can in theory distinguish between the different forms of Dark Energy. The patterns of galaxy clustering contain information about how cosmic structure is amplified from initial small fluctuations. This clustering encodes a robust ‘standard ruler’ or ‘average separation’ between galaxies which could be used to map out the expansion history of the universe in a manner analogous to type Ia supernova ‘standard candles’. The nature of this standard ruler is a preference for pairs of galaxies to be separated by a co-moving distance of 150 Mpc. This favoured separation is an echo of sound waves which propagated 13.3 billion years ago through the plasma before the Cosmic Microwave Background epoch of recombination, about 380,000 years after the Big Bang.

These sound waves emanated from primordial dark matter halos, which launched spherical wavefronts driven by radiation pressure from the compressed plasma. These sound waves travelled rapidly in the early universe, covering a comoving distance of 150 Mpc between the Big Bang and the epoch of recombination.

This study of the Dark Energy sounds straightforward, but it’s not. The problem is that the standard ruler we are using is very large. Hence it is necessary to observe large regions of space to produce galaxy redshift surveys that cover Giga-parsec volumes to make a precision measurement of the BAO signal.

The baryon acoustic oscillations that produce the peaks and troughs in the CMB angular power spectrum can also be seen in the distribution of galaxies in space. Before the electrons and protons combine to form hydrogen, a transparent gas, the free electrons strongly scattered the photons of the CMB. The photons form a high pressure fluid, and if there is a pressure gradient, the electrons will be pushed down the pressure gradient. But if the electrons move, the protons must follow or else a large electric field will be set up, which then pulls the protons along to follow the electrons. Thus the normal matter ("baryons ") and the CMB photons are tied together to make a "baryon-photon" fluid. This fluid has a high sound speed since the photons provide most of the density and almost all of the pressure. As a result the sound speed in the baryon-photon fluid is about 170,000 km/sec. In a region with high initial density, there will be a high pressure in the baryon-photon fluid which will propagate as an expanding spherical sound wave. The animation at right shows a cross-section of this process. In this figure dark matter is blue, baryons are green, and photons are red. Both recombination the baryon-photon fluid is red plus green which is yellow. After recombination the photons go off at the speed of light and baryons are left sitting in a spherical shell around the initial excess density of dark matter. The sound wave travels for about 400,000 years before recombination, at a large fraction of the speed of light, and the distances covered before recombination expand along with the Universe, so at recombination the shell has a radius of about 450,000 light years. This expands after recombination to a current size of 500 million light years. Thus we expect to see an enhanced number of galaxy pairs separated by 500 million light years.

This effect was first detected in Eisenstein et al. (2005). The latest results from BOSS, the Baryon Oscillation Spectroscopic Survey, which is working to get redshifts for 1.5 million Luminous Red Galaxies out to redshift z = 0.7, are detailed in a paper by Anderson et al.. They have a strong 10σ detection of the BAO signal and measurements of the acoustic scale length in two redshift bins centered at z = 0.32 and 0.57.

Astronomers calculate a function ξ(s), which is the fraction of excess pairs at a separation s.

This function falls rapidly with distance, so the graph above plots s2ξ(s) which is much flatter, versus the distance s. The distance is measured in funny units: h-1Mpc, where h is the Hubble constant divided by 100 km/sec/Mpc. The secondary peak due to the baryon shells is seen at about 105 h-1Mpc, or about 500 million light years.

The thumbnail below is my simplified way of showing how these data, combined with the CMB measurement of the acoustic scale length at z = 1089, and the supernova measurement of the acceleration of the expansion of the Universe, provide enough information to simultaneously determine the current matter density, the current dark energy density and the rate of change of the dark energy density. The figure is labeled with the "Equation of State"

but I think a better way to think of this is in terms of the "cosmic interest rate" on dark energy density. The percentage change per unit time in the dark energy density is less than 1/3 of the Hubble rate and could well be zero, as expected for a cosmological constant.

University of California in Los Angeles. Available in: http://www.astro.ucla.edu/~wright/BAO-cosmology.html. Access in: 21/12/22018.

Swinburne University of Technology. Available in: http://astronomy.swin.edu.au/cosmos/B/Baryonic+Acoustic+Oscillations. Access in: 21/12/2018.