A neutron star is the collapsed core of a giant star which before collapse had a total of between 10 and 29 solar masses. Neutron stars are the smallest and densest stars, not counting hypothetical quark stars and strange stars. Neutron stars have a radius on the order of 10 kilometres (6.2 mi) and a mass between 1.4 and 2.16 solar masses. They result from the supernova explosion of a massive star, combined with gravitational collapse, that compresses the core past white dwarf star density to that of atomic nuclei.

Once formed, they no longer actively generate heat, and cool over time; however, they may still evolve further through collision or accretion. Most of the basic models for these objects imply that neutron stars are composed almost entirely of neutrons (subatomic particles with no net electrical charge and with slightly larger mass than protons); the electrons and protons present in normal matter combine to produce neutrons at the conditions in a neutron star. Neutron stars are supported against further collapse by neutron degeneracy pressure, a phenomenon described by the Pauli exclusion principle, just as white dwarfs are supported against collapse by electron degeneracy pressure. If the remnant star has a mass greater than about 3 solar masses, it continues collapsing to form a black hole.

Neutron stars that can be observed are very hot and typically have a surface temperature of around 600000 K. They are so dense that a normal-sized matchbox containing neutron-star material would have a weight of approximately 3 billion tonnes, the same weight as a 0.5 cubic kilometre chunk of the Earth (a cube with edges of about 800 metres). Their magnetic fields are between 108 and 1015 (100 million to 1 quadrillion) times as strong as that of the Earth. The gravitational field at the neutron star's surface is about 2×1011 (200 billion) times that of the Earth. 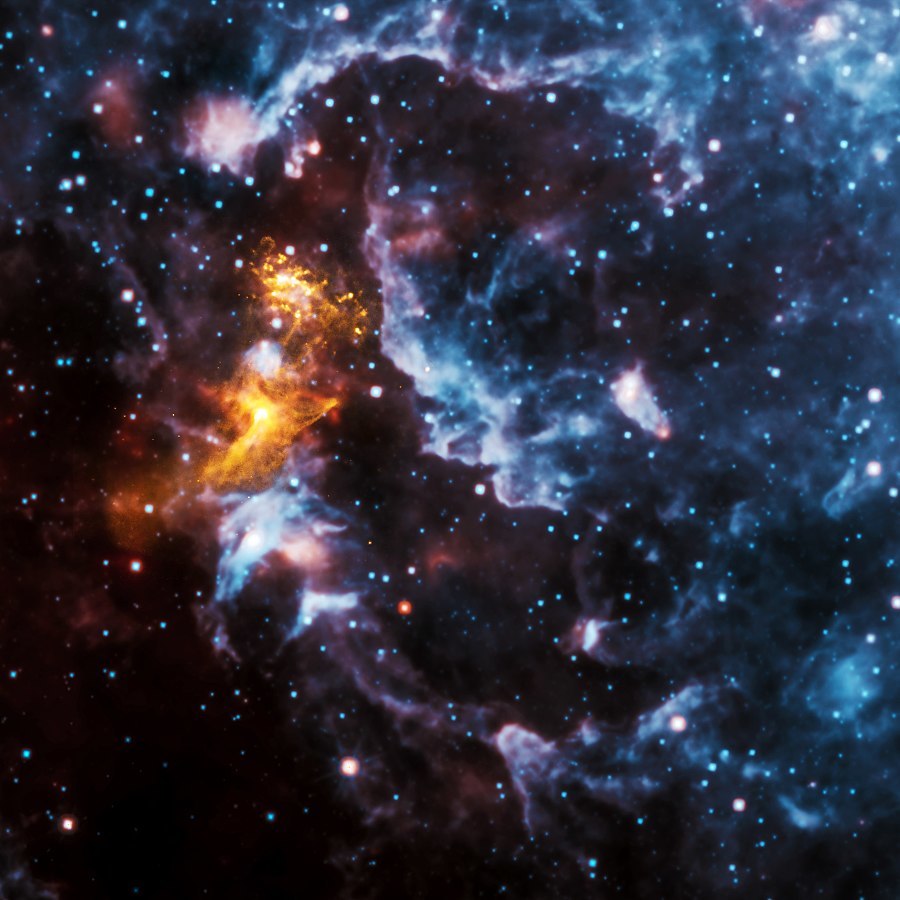 Radiation from the pulsar PSR B1509-58, a rapidly spinning neutron star, makes nearby gas glow in X-rays (gold, from Chandra) and illuminates the rest of the nebula, here seen in infrared (blue and red, from WISE).

There are thought to be around 100 million neutron stars in the Milky Way, a figure obtained by estimating the number of stars that have undergone supernova explosions.[ However, most are old and cold, and neutron stars can only be easily detected in certain instances, such as if they are a pulsar or part of a binary system. Slow-rotating and non-accreting neutron stars are almost undetectable; however, since the Hubble Space Telescope detection of RX J185635-3754, a few nearby neutron stars that appear to emit only thermal radiation have been detected. Soft gamma repeaters are conjectured to be a type of neutron star with very strong magnetic fields, known as magnetars, or alternatively, neutron stars with fossil disks around them. At the meeting of the American Physical Society in December 1933 (the proceedings were published in January 1934), Walter Baade and Fritz Zwicky proposed the existence of neutron stars, less than two years after the discovery of the neutron by Sir James Chadwick. In seeking an explanation for the origin of a supernova, they tentatively proposed that in supernova explosions ordinary stars are turned into stars that consist of extremely closely packed neutrons that they called neutron stars. Baade and Zwicky correctly proposed at that time that the release of the gravitational binding energy of the neutron stars powers the supernova: "In the supernova process, mass in bulk is annihilated". Neutron stars were thought to be too faint to be detectable and little work was done on them until November 1967, when Franco Pacini pointed out that if the neutron stars were spinning and had large magnetic fields, then electromagnetic waves would be emitted. Unbeknown to him, radio astronomer Antony Hewish and his research assistant Jocelyn Bell at Cambridge were shortly to detect radio pulses from stars that are now believed to be highly magnetized, rapidly spinning neutron stars, known as pulsars.

In 1965, Antony Hewish and Samuel Okoye discovered "an unusual source of high radio brightness temperature in the Crab Nebula". This source turned out to be the Crab Pulsar that resulted from the great supernova of 1054.

In 1967, Iosif Shklovsky examined the X-ray and optical observations of Scorpius X-1 and correctly concluded that the radiation comes from a neutron star at the stage of accretion.

In 1971, Riccardo Giacconi, Herbert Gursky, Ed Kellogg, R. Levinson, E. Schreier, and H. Tananbaum discovered 4.8 second pulsations in an X-ray source in the constellation Centaurus, Cen X-3. They interpreted this as resulting from a rotating hot neutron star. The energy source is gravitational and results from a rain of gas falling onto the surface of the neutron star from a companion star or the interstellar medium.

In 1974, Joseph Taylor and Russell Hulse discovered the first binary pulsar, PSR B1913+16, which consists of two neutron stars (one seen as a pulsar) orbiting around their center of mass. Einstein's general theory of relativity predicts that massive objects in short binary orbits should emit gravitational waves, and thus that their orbit should decay with time. This was indeed observed, precisely as general relativity predicts, and in 1993, Taylor and Hulse were awarded the Nobel Prize in Physics for this discovery.

In 1982, Don Backer and colleagues discovered the first millisecond pulsar, PSR B1937+21. This object spins 642 times per second, a value that placed fundamental constraints on the mass and radius of neutron stars. Many millisecond pulsars were later discovered, but PSR B1937+21 remained the fastest-spinning known pulsar for 24 years, until PSR J1748-2446ad (which spins more than 700 times a second) was discovered.

In 2003, Marta Burgay and colleagues discovered the first double neutron star system where both components are detectable as pulsars, PSR J0737-3039. The discovery of this system allows a total of 5 different tests of general relativity, some of these with unprecedented precision.

In 2010, Paul Demorest and colleagues measured the mass of the millisecond pulsar PSR J1614–2230 to be 1.97±0.04 M☉, using Shapiro delay. This was substantially higher than any previously measured neutron star mass (1.67 M☉, see PSR J1903+0327), and places strong constraints on the interior composition of neutron stars.

In 2013, John Antoniadis and colleagues measured the mass of PSR J0348+0432 to be 2.01±0.04 M☉, using white dwarf spectroscopy. This confirmed the existence of such massive stars using a different method. Furthermore, this allowed, for the first time, a test of general relativity using such a massive neutron star.

In August 2017, LIGO and Virgo made first detection of gravitational waves produced by colliding neutron stars.

In October 2018, astronomers reported that GRB 150101B, a gamma-ray burst event detected in 2015, may be directly related to the historic GW170817 and associated with the merger of two neutron stars. The similarities between the two events, in terms of gamma ray, optical and x-ray emissions, as well as to the nature of the associated host galaxies, are "striking", suggesting the two separate events may both be the result of the merger of neutron stars, and both may be a kilonova, which may be more common in the universe than previously understood, according to the researchers. 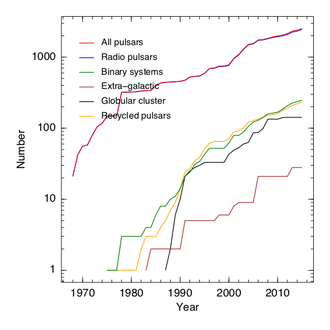 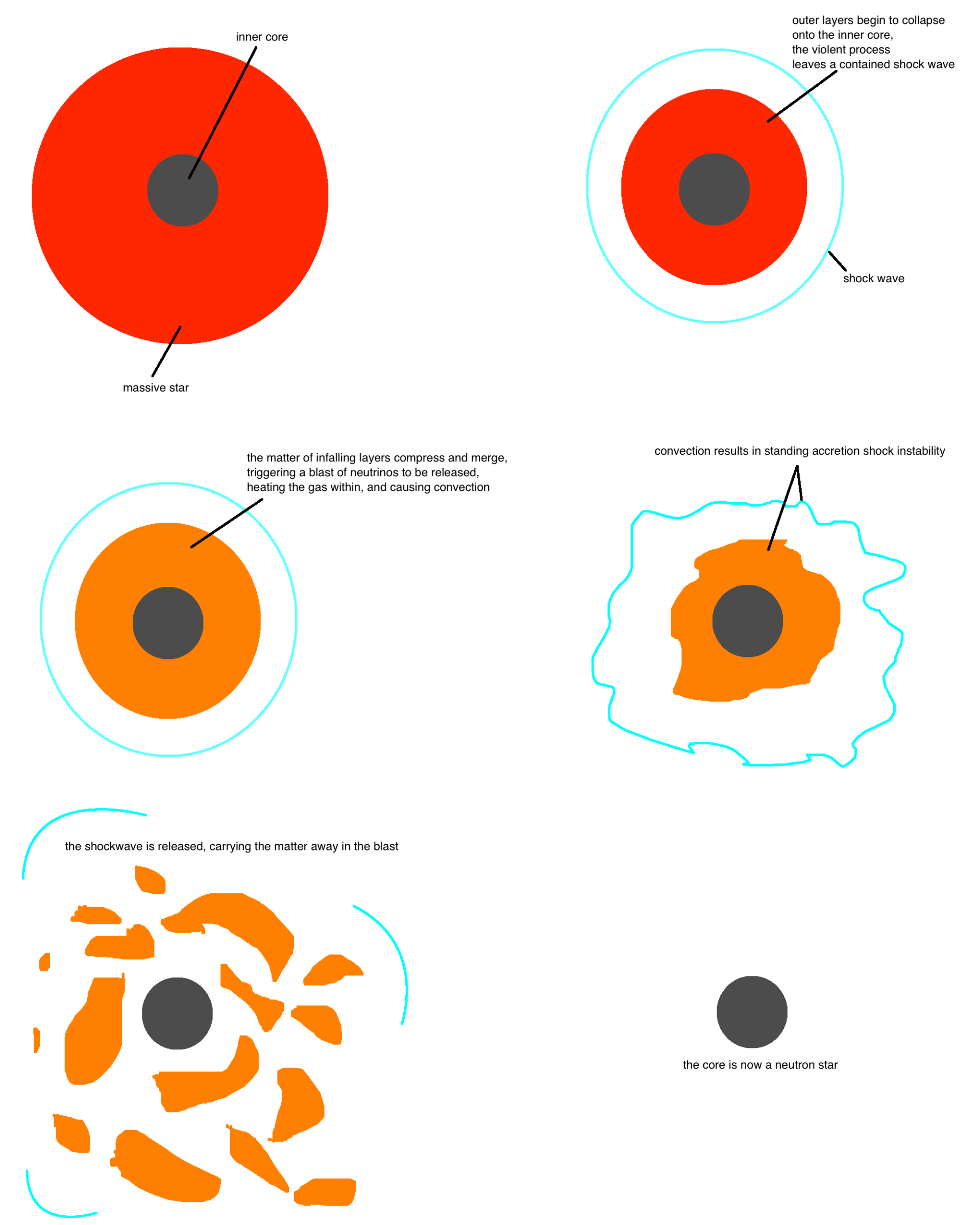 Simplistic representation of the formation of neutron stars.

A historical perspective on the discovery of neutron stars - Lecture