The discovery of cosmic microwave background radiation constitutes a major development in modern physical cosmology. The cosmic background radiation (CMB) was measured by Andrew McKellar in 1941 at an effective temperature of 2.3 K using CN stellar absorption lines observed by W. S. Adams. Theoretical work around 1950 showed that the need for a CMB for consistency with the simplest relativistic universe models. In 1964, US radio astronomers Arno Penzias and Robert Woodrow Wilson rediscovered the CMB, estimating its temperature as 3.5 K, as they experimented with the Holmdel Horn Antenna. The new measurements were accepted as important evidence for a hot early Universe (big bang theory) and as evidence against the rival steady state theory. In 1978, Penzias and Wilson were awarded the Nobel Prize for Physics for their joint measurement.

Penzias and Wilson were working with a very sensitive radio telescope at Bell Labs in New Jersey, looking for something completely different – neutral hydrogen – when they happened to stumble upon a strange signal from their telescope.

In order to detect such a faint signal, they needed to make sure they knew the source of every part of the signal their telescope was detecting. As such, they had to account for a number of peculiar things, such as badly insulated wires and even pigeon droppings in the horn of the antenna. 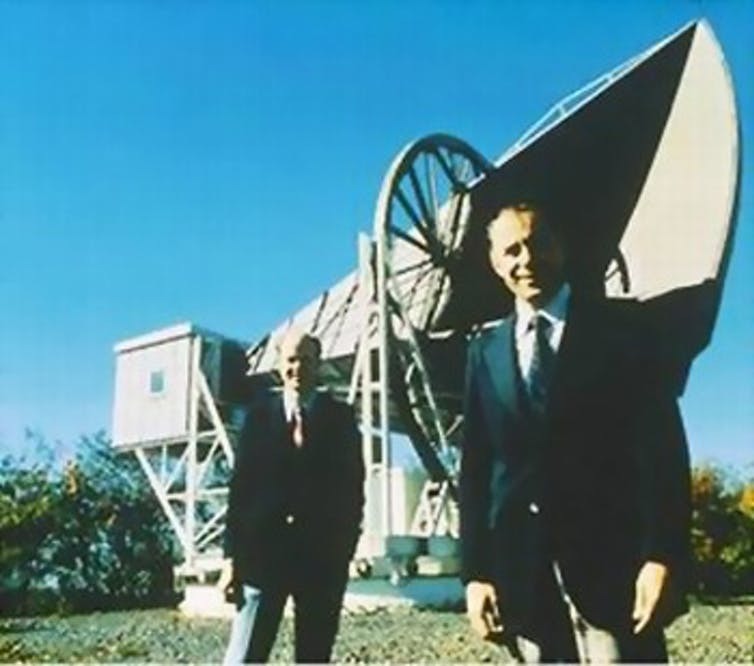 Wilson (foreground) with Penzias in front of the Bell Labs horn radio antenna.

By the middle of the 20th century, cosmologists had developed two different theories to explain the creation of the universe. Some supported the steady-state theory, which states that the universe has always existed and will continue to survive without noticeable change. Others believed in the Big Bang theory, which states that the universe was created in a massive explosion-like event billions of years ago (later determined to be approximately 13.8 billion years).

In 1941, Andrew McKellar used W. S. Adams' spectroscopic observations of CN absorption lines in the spectrum of a B type star to measure a blackbody background temperature of 2.3 K. McKellar referred to his detection as a "'rotational' temperature of interstellar molecules", without reference to a cosmological interpretation, stating that the temperature "will have its own, perhaps limited, significance".

Over two decades later, working at Bell Labs in Holmdel, New Jersey, in 1964, Arno Penzias and Robert Wilson were experimenting with a supersensitive, 6 meter (20 ft) horn antenna originally built to detect radio waves bounced off Echo balloon satellites. To measure these faint radio waves, they had to eliminate all recognizable interference from their receiver. They removed the effects of radar and radio broadcasting, and suppressed interference from the heat in the receiver itself by cooling it with liquid helium to −269 °C, only 4 K above absolute zero.

When Penzias and Wilson reduced their data they found a low, steady, mysterious noise that persisted in their receiver. This residual noise was 100 times more intense than they had expected, was evenly spread over the sky, and was present day and night. They were certain that the radiation they detected on a wavelength of 7.35 centimeters did not come from the Earth, the Sun, or our galaxy. After thoroughly checking their equipment, removing some pigeons nesting in the antenna and cleaning out the accumulated droppings, the noise remained. Both concluded that this noise was coming from outside our own galaxy—although they were not aware of any radio source that would account for it.

At that same time, Robert H. Dicke, Jim Peebles, and David Wilkinson, astrophysicists at Princeton Universityjust 60 km (37 mi) away, were preparing to search for microwave radiation in this region of the spectrum. Dicke and his colleagues reasoned that the Big Bang must have scattered not only the matter that condensed into galaxies but also must have released a tremendous blast of radiation. With the proper instrumentation, this radiation should be detectable, albeit as microwaves, due to a massive redshift.

When a friend (Bernard F. Burke, Prof. of Physics at MIT) told Penzias about a preprint paper he had seen by Jim Peebles on the possibility of finding radiation left over from an explosion that filled the universe at the beginning of its existence, Penzias and Wilson began to realize the significance of what they believed was a new discovery. The characteristics of the radiation detected by Penzias and Wilson fit exactly the radiation predicted by Robert H. Dicke and his colleagues at Princeton University. Penzias called Dicke at Princeton, who immediately sent him a copy of the still-unpublished Peebles paper. Penzias read the paper and called Dicke again and invited him to Bell Labs to look at the horn antenna and listen to the background noise. Dicke, Peebles, Wilkinson and P. G. Roll interpreted this radiation as a signature of the Big Bang.

To avoid potential conflict, they decided to publish their results jointly. Two notes were rushed to the Astrophysical Journal Letters. In the first, Dicke and his associates outlined the importance of cosmic background radiation as substantiation of the Big Bang Theory. In a second note, jointly signed by Penzias and Wilson titled, "A Measurement of Excess Antenna Temperature at 4080 Megacycles per Second," they reported the existence of a 3.5 K residual background noise, remaining after accounting for a sky absorption component of 2.3 K and a 0.9 K instrumental component and attributed a "possible explanation" as that given by Dicke in his companion letter.

The blackbody radiation is seen as a remnant of the transparency point at which theexpanding universe dropped below about 3000K so that radiation could escape.

A uniform background radiation in the microwave region of the spectrum is observed in all directions in the sky. Currently it is commonly called the Cosmic Microwave Background or just CMB, alluding to its Wien peak in the microwave region. It shows the wavelength dependence of a "blackbody" radiator at about 3 Kelvins temperature. It is considered to be the remnant of the radiation emitted at the time the expanding universe became transparentat about 3000 K temperature. The discovery of the 3K microwave background radiation was one of the crucial steps leading to the calculation of the standard "Big Bang" model of cosmology, its role being that of providing estimates of relative populations of particles and photons. Research using the Far Infrared Absolute Spectrophotometer (FIRAS) onboard the COBE satellite have given a temperature of 2.725 +/- 0.002 K. Previous experiments had shown some anisotropy of the background radiation due to the motion of the solar system, but COBE collected data showing fluctuations in the background. Some fluctuations in the background are necessary in big bang cosmology to give enough non-uniformity for galaxies to form. The apparent uniformity of the background radiation is the basis for the "galaxy formation problem" in big bang cosmology. The more recent WMAP mission gave a much higher resolution picture of the anisotropies in the cosmic background radiation.The precision of the mapping of the CMB was improved with the Planck satellite, giving the best current values for the descriptive parameters.

The data for the round figure of 109 photons per nuclear particle is the "most important quantitative conclusion to be drawn from the measurements of the microwave radiation background ..."(Weinberg p66-70). This allowed the conclusion that galaxies and stars could not have started forming until the temperature dropped below 3000K. Then atoms could form and remove the opacity of the expanding universe; light could get out and relieve the radiation pressure. Star and galaxy formation could not occur until the gravitational attraction could overcome the outward radiation pressure, and at 109 photons/baryon a critical "Jean's mass" of about a million times that of a large galaxy would be required. With atom formation and a transparent universe, the Jeans mass dropped to about 10-6 the mass of a galaxy, allowing gravitational clumping. 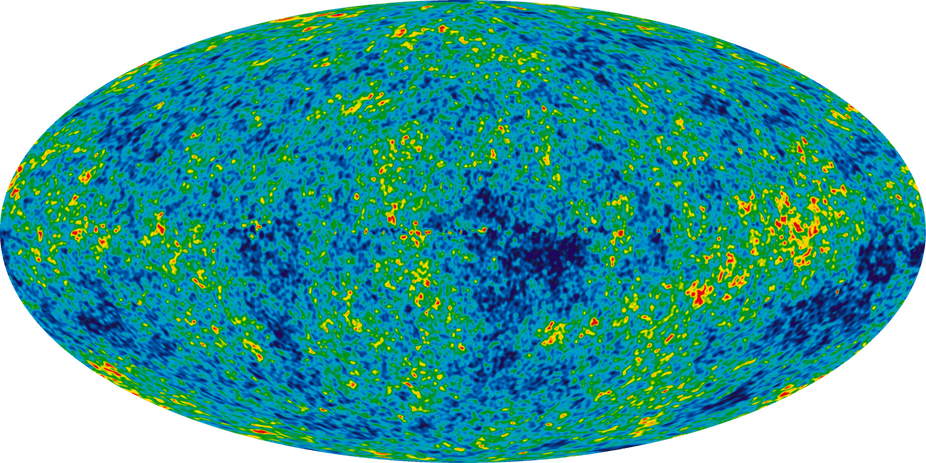 CMB based on COBE (NASA) data.

The CMB is the oldest light in the universe, dating from the first epoch in which photons could travel freely. Shortly after the Big Bang, the cosmos was a seething-hot, opaque fog of plasma and energy; things changed about 380,000 years later, when temperatures dropped enough for electrically neutral atoms to form, and the universe became transparent.

The CMB is markedly uniform, lending support to the theory of cosmic inflation, which posits that the universe expanded much faster than the speed of light just a few tiny fractions of a second after the Big Bang.

"Why the cosmic microwave background temperature is the same at different spots in the sky would be a mystery if it was not for inflation saying, well, our whole sky came from this tiny region," Charles Bennett of Johns Hopkins University in Baltimore told Space.com last year. Bennett is principal investigator of NASA's CMB-mapping Wilkinson Microwave Anisotropy Probe (WMAP), which launched in 2001 and stopped gathering data in 2010.

But the CMB also contains tiny temperature variations, which signify areas of different densities. These density fluctuations were the seeds that eventually gave rise to stars, galaxies and all the other structure that we observe in the universe today, researchers say.

Scientists have extracted a great deal of information from the CMB over the years. In March, for example, a team of astronomers announced that they had found evidence of primordial gravitational waves in the CMB — a discovery that, if confirmed, provides a long-sought "smoking gun" for the theory of cosmic inflation.