The Drude model of electrical conduction was proposed in 1900 by Paul Drude to explain the transport properties of electrons in materials (especially metals). The model, which is an application of kinetic theory, assumes that the microscopic behavior of electrons in a solid may be treated classically and looks much like a pinball machine, with a sea of constantly jittering electrons bouncing and re-bouncing off heavier, relatively immobile positive ions.

The two most significant results of the Drude model are an electronic equation of motion,

and a linear relationship between current density J and electric field E,

Here t is the time, ⟨p⟩ is the average momentum per electron and q, n, m, and τ are respectively the electron charge, number density, mass, and mean free time between ionic collisions (that is, the mean time an electron has traveled since the last collision). The latter expression is particularly important because it explains in semi-quantitative terms why Ohm's law, one of the most ubiquitous relationships in all of electromagnetism, should be true.

The model was extended in 1905 by Hendrik Antoon Lorentz (and hence is also known as the Drude–Lorentz model) and is a classical model. Later it was supplemented with the results of quantum theory in 1933 by Arnold Sommerfeld and Hans Bethe, leading to the Drude–Sommerfeld model.

The Drude model considers the metal to be formed of a mass of positively charged ions from which a number of "free electrons" were detached. These may be thought to have become delocalized when the valence levels of the atom came in contact with the potential of the other atoms. 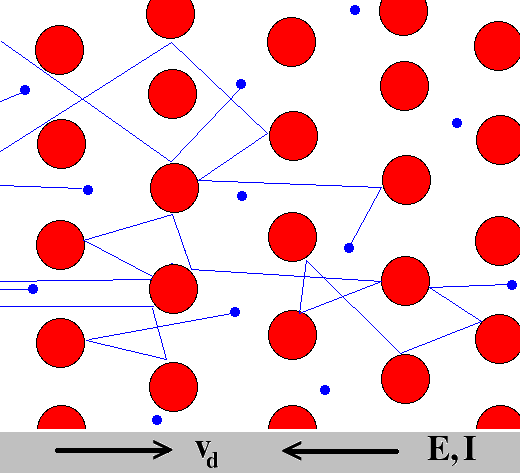 Accuracy of the model

Historically, the Drude formula was first derived in an incorrect way, namely by assuming that the charge carriers form a classical ideal gas. Arnold Sommerfeld considered quantum theory and extended the theory to the free electron model, where the carriers follow Fermi–Dirac distribution. Amazingly, the conductivity predicted turns out to be the same as in the Drude model, as it does not depend on the form of the electronic speed distribution.

Drude model provides a very good explanation of DC and AC conductivity in metals, the Hall effect, and the magnetoresistance in metals near room temperature. The model also explains partly the Wiedemann–Franz law of 1853. However, it greatly overestimates the electronic heat capacities of metals. In reality, metals and insulators have roughly the same heat capacity at room temperature. The model can also be applied to positive (hole) charge carriers, as demonstrated by the Hall effect.

One note of trivia surrounding the theory is that in his original paper, Drude made a conceptual error, estimating the Lorenz number of Wiedemann-Franz law to be in fact be twice of what it classically should have been, thus making it seem in agreement with the experimental measurement. Another surprise is that the experimental value for the specific heat is about 100 smaller than the classical prediction but this factor cancels out with the mean electronic speed that is actually about 100 times bigger than Drude's calculation.