The Battle of Anghiari

External Link: The Battle of Anghiari 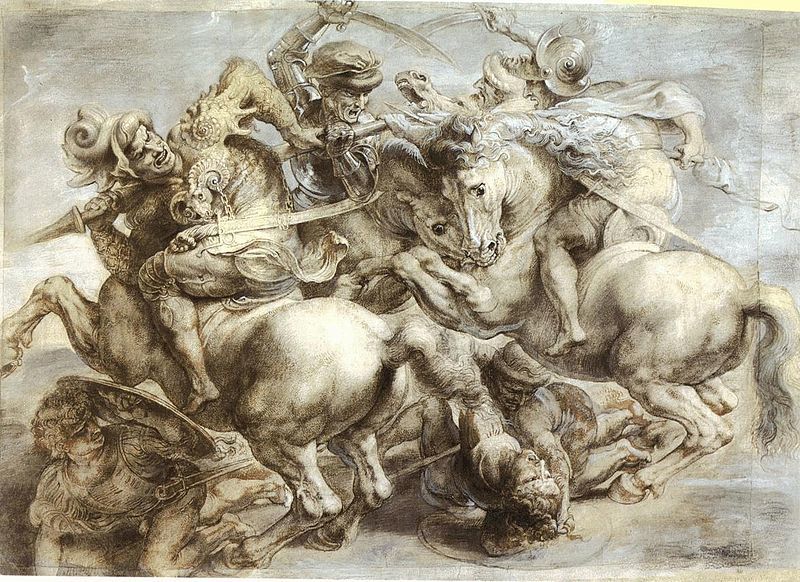 The Battle of Anghiari (1505) is a lost painting by Leonardo da Vinci, at times referred to as "The Lost Leonardo", which some commentators believe to be still hidden beneath one of the later frescoes in the Salone dei Cinquecento (Hall of the Five Hundred) in the Palazzo Vecchio, Florence. Its central scene depicted four men riding raging war horses engaged in a battle for possession of a standard, at the Battle of Anghiari in 1440.

Many preparatory studies by Leonardo still exist. The composition of the central section is best known through a drawing by Peter Paul Rubens in the Louvre, Paris. This work, dating from 1603 and known as The Battle of the Standard, was based on an engraving of 1553 by Lorenzo Zacchia, which was taken from the painting itself or possibly derived from a cartoon by Leonardo. Rubens succeeded in portraying the fury, the intense emotions and the sense of power that were presumably present in the original painting. Similarities have been noted between this Battle of Anghiari and the Hippopotamus Hunt painted by Rubens in 1616.

In March 2012, it was announced that a team led by Maurizio Seracini has found evidence that the painting still exists on a hidden inner wall behind a cavity, underneath a section of Vasari's fresco in the chamber. The search was discontinued in September 2012, without any further progress having been made, due to conflict among the involved parties.