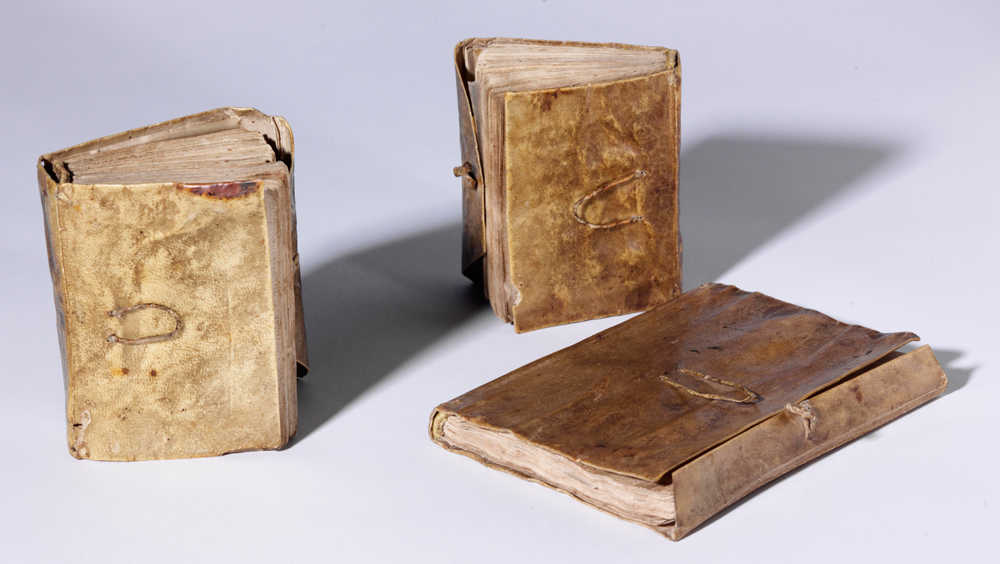 A codex is a bound book made up of separate pages. It developed in late Roman times and replaced the scroll as the preferred way of keeping texts. Codices were originally hand-written, though they began to be printed from the mid-15th century. Some texts, including personal memoranda and writings such as notebooks, continued to be written by hand.

The Forster Codices were part of the library of John Forster (1812–76), bequeathed to the V&A on his death as a gesture of support for its educational mission. The Codices are made up of five of Leonardo da Vinci's notebooks, bound into three volumes.

It is not known when the notebooks were bound together in this way. They may have been brought together and bound in Spain while they were owned by the Spanish sculptor Pompeo Leoni (1533–1608). Leonardo may have compiled the notebooks when they were unbound or in wrappers of some kind. The notebooks are not bound in any logical fashion and only one carries any indication of when it was made (Codex Forster I1).

The notebooks are written in Leonardo’s famous ‘mirror-writing’. This writing has given rise to much speculation. Was he trying to ensure that only he could read his notes? He was left-handed and probably found it easier to write from right to left. Writing masters of the period were liable to make demonstrations of mirror-writing, so that it may not have seemed as strange as it does today. The letter-shapes are in fact very ordinary: Leonardo used the kind of script that his father, a notary, would have used. Once the eye has become accustomed to the scripts of the period, it soon learns to decipher the mirror-writing Leonardo used.

The paper for the notebooks was probably bought at one of the many stationers’ shops in Milan. Leonardo either bought full-size sheets and folded them to make booklets, or bought the booklets ready-made. The ink probably came from the same source.

The earliest of the V&A’s notebooks was compiled around 1487–90 when Leonardo was a servant of the Sforza duke in Milan. It contains notes and diagrams for devices relating to hydraulic engineering and on the moving and raising of water. Some of the ideas recorded investigate perpetual motion. The writing on a few sheets of this notebook extend beyond the gutter which indicates that Leonardo wrote them before the sheets were folded into the booklet as it survives today.

This is the most miscellaneous of the notebooks. Interspersed with notes on geometry, weights and hydraulics are sketches of a horse’s legs, perhaps connected with Leonardo’s work on an equestrian statue for the founder of the Sforza dynasty, drawings of hats and cloths that may have been ideas for costumes at balls, and an account of the anatomy of the human head.

This notebook was compiled around 1495. It contains notes on the theory of proportions and mentions the work of Leonardo’s colleague in Milan, a famous mathematician named Luca Paccioli (died about 1514). It also contains a good deal of miscellaneous material: bells and a striking mechanism, a portrait of the General of the Franciscan Order, Francesco Nanni-Samson, and a passage discussing the postures of a group at a table, possibly relating to Leonardo’s work on the Last Supper fresco in Santa Maria delle Grazie in Milan, begun in about 1495.

Made up between about 1495 and 1497, Codex Forster II2 has extensive notes on the theory of weights, traction, stresses and balances. It also contains an examination of a crossbow (a terrifying weapon outlawed on several occasions by the Papacy), and a remark ridiculing those who thought perpetual motion possible.

A note in Leonardo’s own hand gives this notebook a title, ‘Libro titolato de strasformatione’, and dates it July 1505. This shows that it was begun when he was in Florence, just after he had undertaken to produce his famous ‘Battle of Anghiari’ mural in the Palazzo della Signoria, the centre of the city’s government. The notes consider the measurement of solid bodies and the problems of relating changes in shape to those of volume, a branch of mathematics known today as topology.

One volume of the notebooks is on display in Gallery 64 (Medieval & Renaissance).