End of the last Treasure Voyage of the Ming Dynasty

External Link: End of the last Treasure Voyage of the Ming Dynasty

In Chinese history, the treasure voyages were the seven Ming-era maritime voyages of the treasure fleet between 1405 and 1433. The Yongle Emperor initiated the construction of the treasure fleet in 1403. The grand project resulted in seven far-reaching ocean voyages to the coastal territories and islands in and around the South China Sea, the Indian Ocean, and beyond. Admiral Zheng He was commissioned to command the treasure fleet for the expeditions. Six of the voyages occurred during the Yongle reign (r. 1402–24), while the seventh voyage occurred under the Xuande reign (r. 1425–1435). The first three voyages reached up to Calicut on India's southwestern coast, while the fourth voyage went as far as Hormuz in the Persian Gulf. Afterwards, the fleet made voyages farther away to the Arabian Peninsula and East Africa.

The Chinese expeditionary fleet was heavily militarized and carried great amounts of treasures, which served to project Chinese power and wealth to the known world. They brought back many foreign ambassadors whose kings and rulers were willing to declare themselves tributaries of China. During the course of the voyages, they destroyed Chen Zuyi's pirate fleet at Palembang, conquered the Sinhalese Kotte kingdom of King Alekeshvara, and defeated the forces of the Semudera pretender Sekandar in northern Sumatra. The Chinese maritime exploits brought many foreign countries into the nation's tributary system and sphere of influence through both military and political supremacy, thus incorporating the states into the greater Chinese world order under Ming suzerainty.

The treasure voyages were commanded and overseen by the eunuch establishment whose political influence was heavily dependent on imperial favor. However, within Ming China's imperial state system, the civil government were the primary political opponents of the eunuchs and the opposing faction against the expeditions. Around the end of the maritime voyages, the civil government gained the upper hand within the state bureaucracy, while the eunuchs gradually fell out of favor after the death of the Yongle Emperor.

Over the course of the maritime voyages of the early 15th century, Ming China became the pre-eminent naval power by projecting its sea-power further to the south and west. There is still much debate to this day about the actual purpose of the voyages, the size of the ships, the magnitude of the fleet, the routes taken, the nautical charts employed, the countries visited, and the cargo carried. 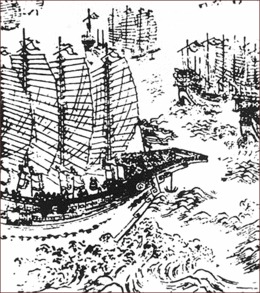