Jacques Doniol-Valcroze’s L’homme au cerveau greffé (The Man with the Transplanted Brain) also focuses on the emergence of a new postoperative person. The middle-aged, fatally ill surgeon Jean Marcilly and his collaborator Robert Desagnac have been experimenting with brain transplantation in animals.

When the body of the young Franz Eckermann, fatally injured in a car crash, arrives at Marcilly’s clinic, the surgeon asks Desagnac to graft his brain into the victim’s body. In the end, the resulting individual (let’s call him Franz2) voluntarily assumes Franz’s persona.

In Change of Mind [see event of January 01, 1969], the grafted brain completely dominated the rest of the body, and the transformations of the self derived from the hybrid’s encounter with his social environment. In contrast, The Man with the Transplanted Brain stages the reemergence of Franz’s personality, accompanied by certain antagonisms of brain and body, as crucial elements for the metamorphosis of Franz2 into a genuinely new individual.

Like Change of Mind, The Man with the Transplanted Brain lacks resolution: We do not know what ultimately happens to the main protagonists, nor do we find out if there is a limit to the number of successive brain transplants, a threshold beyond which they would definitely not be “the same.” The question these films choose to leave open is, at bottom, the ancient one of Theseus’s ship: The vessel the hero used to return from Crete after slaying the Minotaur was kept in the Athens harbor, with its parts being replaced as they decayed. Thus, as Plutarch reports in his Life of Theseus (here in John Dryden’s version), “this ship became a standing example among the philosophers, for the logical question of things that grow; one side holding that the ship remained the same, and the other contending that it was not the same.” 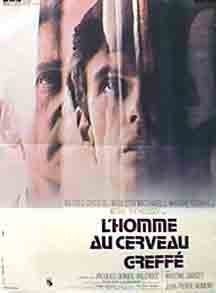